Are you worried that your golf skills are not improving? Don't take it all on yourself. Playing with your friends is a great way to solve this problem. The more people you have, the better. Go out with as many friends as you can!

It's easy, isn't it? It's all you need and your ball will fly straight to wherever you want it to go. Or rather, it's hard not to fly too far.

If your ball accidentally hits a friend, don't worry. They will laugh and forgive you. Of course, you too, please be prepared to take physical risks.

・Your club belongs to everyone

Remember, we are all a team. You may have one club, but you have as many chances as the number of your friends to get a shot. Sometimes, you just need to find the right spot, push the directional key and leave the club to your friends.

Have a nice golf!

I came here multiple times to play & enjoy the game. But i never rate it. Now it's done. Game rated & enjoyed!!

I love golf games mixed with other genre! This was such an incredible game, thank you

Good game! I like the graphics, and the mechanics are very intuitive.

like it but as a old fashioned guy would love to have a windows build to keep in my usb stick...

Glad you like it. Unfortunately, puzzlescript only supports html.  My current knowledge doesn't meet your expectation.

anyway thanks for the reply and for such a fun game :)

I think most web browsers can run raw html offline, which puzzlescript can do

Thanks for the reply :)

A work of sublime genius.

This is very silly.  Awesome.  Thank you for the lovely game :)  [It ain't easy! Still working through it...]

I have an idea for a few new features that could be useful in PuzzleScript, especially for some of the more challenging games!

The MOVEMAX feature allows the creator to put a cap on the player's allotted moves in each level (if put before the level code) or for the entire game (if put in the  prelude of the game.) If a player were to have bypassed the average move count of a level's solution, this could trigger some code that would allow them to skip it (using the win command) or to show them the solution (see below for my suggestion on how to do that.)

The SOLUTION command allows the creator of the game to record themselves solving a level (maybe using the same system that you made for recording GIFs in the editor!) and trigger the solution to play, say, when a player has been stuck on a level for quite some time. This will show them how to solve it and let them move on with the game.

(I don't know how easy it would be for you  to make these features, but I would really appreciate it if you did!)

I would like to put these features into my PuzzleScript game Megaban (see link below) so that people won't get stuck on  a level and quit in frustration or boredom.

What are your thoughts? (On my ideas and my game)

such an enjoyable game! I came back to this about 3 or 4 times, and now I’ve finally beaten it :D thank you!

one small note: I found a solution that seems unintended for level 26, since it doesn’t use the sand: https://youtu.be/7j-eo_8zXl8

Amazing! I think the solution you found is interesting.  I leave it as an extra for those who were not satisfied with 15 holes :) Very glad you enjoyed!

Reply
competor1 year ago
So difficult and fun!
Reply
nebu soku1 year ago

I have added the game to my snake article. Let me know if you'd like to add some of your own words about the inspiration, design process, or reflections on the game.

What great news! Your excellent commentary is already more than enough. The only thing I can add is that the Japanese title is a parody of a famous Japanese game. (This is unimportant information. There is no need to actually add it.) Anyway, I'm not sure of my English, so I can't give a more accurate comment than yours XD Thanks a lot!

So
Um
On Level 33...there doesn't seem to be any possible way to BEAT it. Like, I've studied this course for several hours now. It's well designed, and it feels like there should be a solution, but...it seems designed to potentially be unbeatable. I don't know what to do. Please help?

Thanks for playing! For Level 33, apply the same technique you used for level 20. First, draw a line along the perimeter to next to the flag. From there, prepare to utilize the bunker and identify the space to execute the technique. I'm not good at English. I hope you can understand what I mean.

Huh. I appreciate the starting point at least, but I can't understand how to get back to the bottom floor position when the ball is in the way, it seems like everything I do encloses the ball.

Thank you! I beat it.

thank you too, but i play on puzzlescript site version, and only 15 level, can't find level 33 (because i stucked on x to hit screen)

It's 15 in total. The level selector counts message screens. 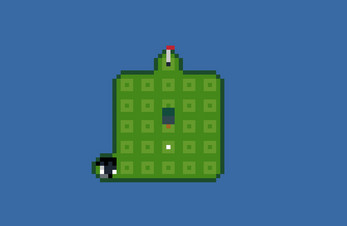 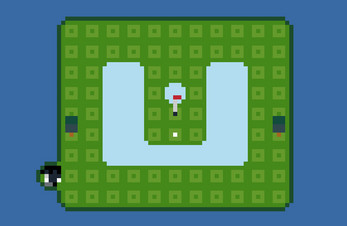 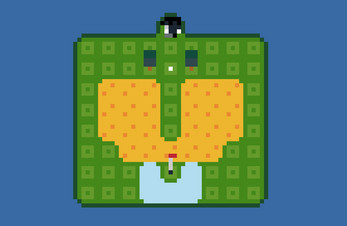